This RF adapter cable is super handy for anyone doing RF work
Often times, small electronics save space by having a pick-and-placeable u.FL connector (also called uFL, IPEX, IPAX, IPX, MHF, and AM). But most antennas have SMA or RP-SMA connectors on them. This little cable will bridge the two!
It has a panel-mount RP-SMA connector on the end, often used for wifi routers and antennas
GPS and cellular connections often use SMA
Check the antenna you want to connect, and the close up image above to verify if you need RP-SMA or SMA as they are not compatible! 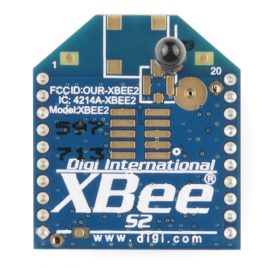 This is the XBee XBP24-BZ7UIT-004 module from Digi. Series 2 improves on the power output and data protocol. Series 2 modules allow you to create complex mesh networks based on the XBee ZB ZigBee mesh firmware. These modules allow a very reliable and simple communication between microcontrollers, computers, systems, really anything with a serial port! Point to point and multi-point networks are supported.
not rated ₹1,180.00 Read more

The module is small and easy to mount using two mounting tabs on the side of the sensor. The on-board JST-SH connector has four signals: Vcc, GND, Tx, Rx. A compatible JST-SH pigtail can be found in the related items below. Demo software for PC is available in the documents below, simply connect the module to your computer using an FTDI Breakout and start the software to read fingerprints!
not rated ₹1,758.20 Read more