The ISD1760 Voice Recording Playback module is a simple and practical circuit board designed to quickly familiarize with and master the ISD1700 series chips. It is suitable for the full range of ISD1700 chips, with simple operation and complete functions. The ISD1700 series of recording and playback chips is a highly integrated, high performance chip.

The ISD1760 Voice Recording Playback Module also has a new recording reminder function. When there is a new recording, the LED flashes once every few seconds to prompt the user to have a new recording. There are also 4 sound effects to remind the user of the results of the operation, such as start recording, stop recording, erasing, next song and all erasure. The recorded data is stored in the FLASH of the chip, without any compression, so it has better sound quality and power-off storage.

The chip has two independent voice signal input channels, microphone input and analog signal input. In the independent button mode, when a function is completed, the chip will automatically enter the power-down mode to reduce power consumption. In SPI mode, the user can perform more functions on the chip. For recording and playback of any storage address, read and write the Analog Path Configuration Register (APC).

How To Operate ISD1760 Module Independently:

Press and hold the REC button, and the LED will light up. At this point, speaking to the MIC, the content will be recorded in the ISD1700 voice chip.
After recording a paragraph, the LED will be turned off at the same time. Press again to start recording the second segment. The subsequent segments will be operated in sequence.

There are two ways, edge trigger and level trigger. (Note: After recording the sound, the playback pointer will stay at the start address of the last recorded segment, at this time the playback will put the last segment)
Edge trigger: Click the PLAY button to put the current segment, play The LED flashes during the period until it stops at the end of playback. After the playback ends, the playback pointer points to the start address of the segment just placed, and once again press the PLAY button to place the segment just finished.
Level trigger: Press the PLAY button frequently to play all the voice messages, and cycle until the button is released.

A single-segment erase operation can only be valid for the first and last segments. When the playback pointer is in the first or last segment, clicking this button erases the first or last segment. The playback pointer will jump to the second or second-to-last segment before erasure. Press this button for more than 3 seconds to enter the “all erase operation mode”, and the LED light flashes twice. Continue to press this button. The LED flashes 7 times and then goes off. At this time, release the button and the voice information in the chip is Erase all.
5. Reset RESET:

Click this button to adjust the size of the chip output sound. The default output of the chip is the maximum value of the sound. Press once every time and the sound is attenuated by 4db. After the sound is at a minimum, continue to press this button, and each click will increase the sound by 4db (Note: after the reset is performed, the sound output is maximum).

This Water Level Sensor Float Switch is a device used to sense the level of the liquid within a tank, it may actuate a pump, an indicator, an alarm, or other device. A compact, horizontally mounted float switch which can be … Continued

This is a simple but very useful module which uses a potential divider to reduce an input voltage by a factor of 5. The Voltage Detection Sensor Module 25V allows you to use the analog input of a microcontroller to monitor voltages much higher than it capable of sensing.
not rated ₹80.00 + GST Add to basket 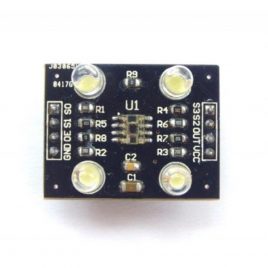 The TCS3200 Colour Sensor Module uses a high-quality light sensor allowing you to sense any color through a combination of Red, Green, and Blue.
not rated ₹195.00 + GST Read more

BH1750FVI is a digital Ambient Light Sensor having I2C interface. This IC is the suitable for obtaining the ambient light data. It is possible to detect wide range at high resolution
not rated ₹130.00 + GST Add to basket